Improving the Quality of a Mobile App Using Non-Functional Testing

The horizon defined for the quality of mobile applications is ever-changing. Added to that, the operating systems and the system integration of a mobile application are not under the control of the developers. It means that the application or any updates rolled out for it should be able to flow well with the changing scenarios and the development of technologies.

Nowadays, there is a need to automate the major elements of non-functional testing, and failing to do so will put you back in the race. With the development of big data and IoT, it is not only going to take up a big chunk of your time, but also it is going to be hard to test manually every time.

Mass automation of non-functional testing will help in continuous delivery in terms of efficiency to further improve the quality. Engineers will get instant feedback on the app status and identify and eliminate bugs faster. Automated testing of non-functional elements enables application behavior to be more reliable with increased versatility to maintain baseline stability.

Initial non-functional testing will help you recognize and remove any underlying errors that could shed a dangerous influence on the basic structure of the application. And in cases when it goes undetected in the testing process, it could cause the total application to fail.

Generally, in the initial stages, employing the testing of container app installation, recovery testing, testing for the resilience of the network, security testing, API testing, app integration testing, and upgrade testing will concentrate on eliminating all possible fundamental problems itself at the start. 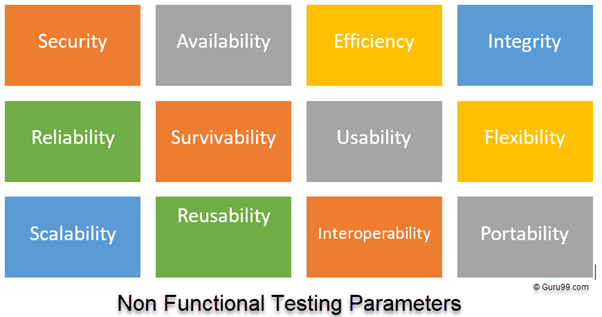 Security testing is one of the most important tests that should be at the top of your priorities. With personal data protection gaining more importance and instances of security breaches increasing, securing your users’ data is essential. In applications with mobile payment options available, it is an added responsibility to provide a secure channel for such transactions to protect your users’ data.

It involves testing if the application shuts down during failure without any errors and If these actions do not destroy the app data. For this test, the engineer has to enable the possible circumstances where the app will be forced to shut down and check how effective the recovery process is.

After releasing an app, time is of the essence to identify bugs, eliminate them and release a fresh and better performing update. If you can’t identify the bugs soon, it will cost you more users. On a running app or when the app is all set to be released, testing on the following is most important – load, scalability, endurance, usability, volume, and localization.

For load testing, the app is stimulated in a real-time environment to measure the app performance with many numbers of users and match its response time with the app performance under normal circumstances to find out the consistency of the application.

In volume testing, we assess the capability of the app to handle an enormous amount of data. We create a database of large size and feed it into the system to see the amount of data till which the app can run and the point where it breaks down.

We use it to find out the performance parameters that contribute to better user experience, error reporting, and assessment of outputs in line with the fed inputs by the users, the efficiency of the graphics interface, and many more.

By identifying the baseline of non-functional testing, you can make your app performance much stronger and better and keep its quality improvements on an upward ascent.