Use of Docker Hub for ASP.NET Core Deployment

This article shares the basics of Docker and the deployment details of Docker with ASP.NET Core. You will find how experts of .Net Development Company use Docker for ASP.NET core deployment in this article. Read it thoroughly and find what professionals want you to know about Docker software and its deployment.

Docker refers to software that helps in creating an image that looks like a virtual machine template and then executes that image instance in a container.

Docker Hub refers to the large repository of images maintained by Docker. It can be used as starting points for images. Simply install the Docker, select an image and then run its instance in the container.

Consider an Asp.net project (an open-source project) that monitors the Docker server activity. Since it is required to run the Docker dash in a container, the project needs to be delivered on Docker Hub as a Docker image. The main requirement is to automate the process of deployment such that the app is tested, build and released on each commit.

Docker Hub makes it possible to make images automatically from a repository of GitHub as long as a Dockerfile is there in the repo. It is possible to build an Asp.Net app inside the Docker container.

The main issue is that the onbuild image of dotnet is quite large at around 500MB. A different image is available for deployment purposes that contains the .Net core (including the libraries and the runtime) and it can run the portable dotnet applications. It would be needed to compile the code to use the runtime image and the output of the compiled code is copied in the image.

To compile the Asp.Net app outside the container, it is required to use a build server. AppVeyor build server can be used for this purpose. It can easily test, build and deploy the .Net apps and it has a subscription plan that is free for open-source projects. However, it is possible to push only the .Net code with AppVeyor and not the docker image. The available solution is to use AppVeyor to get the build artifacts and then use GitHub on another branch using the git push of AppVeyor.

Following is the pipeline for Asp.Net Core continuous deployment:

Docker can be quickly configured on Windows OS and a nodejs app can be hosted inside the docker container.

Many challenges were faced by users with the build server while triggering two builds at the same time (with nodejs and angularjs app). Also, there was a need for smart options for releasing code frequently to the production. So docker was decided as a solution. But it was quite complicated to run Docker on Windows 7 as compared to Windows 10(hyper-v).

Check if the operating system has Hyper-V.

Execute the docker toolbox. There will be three icons on the desktop once the toolbox is installed as shown below:

To get started, double-click the Docker Quickstart. As a result, boot2docker will be downloaded and all necessary settings will be applied. Save the IP address that will appear on the welcome screen. It will be needed to access the application hosted in the docker container. Docker Quickstart will make a default VM that will be used to run the application. Use the following command to map the docker VM with the local folder and container with VM.

In this command, the default VM machine is shut down for the docker. If the docker-machine is not recognized by the command prompt, check if the docker folder has been added to the environment variable PATH. In case, it has not been added, go to the head and then add it. While making an update to the variable PATH, consider your system path as well.

To start the docker VM, run the following command:

Once the local folder is mapped to the docker VM, to access the folder, connect it to docker VM first, add a folder in VM and then mount the host folder to the VM folder.

To change the CPU or RAM of the docker VM, set the same using the Oracle VM Virtual Box. Consider the system tab below the default VM.

It is quite simple to install Docker on the Operating system with Hyper-V. After the installation is complete, a docker icon will be displayed in the notification area. To change the RAM/CPU, right-click on the icon and use the settings option from the menu as shown in the figure. 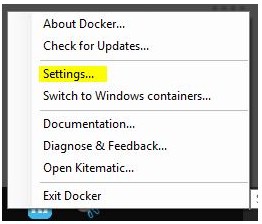 Docker makes it more easy and fast to recreate/create an environment that can be shared or shipped. With the help of Docker Hub, many new technologies that are preconfigured can be explored.

As you have learned that Docker software helps in developing an image that appears like a virtual machine template. It later executes that image instance in a container. Now you also know how experts of Asp.net development company India perform .net core deployment with Docker Hub. Still, if there is any doubt, ask the experts directly in the comments.